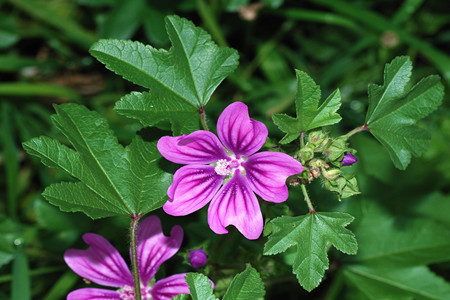 Malva sylvestris is a species of the mallow genus Malva in the family of Malvaceae and is considered to be the type species for the genus. Known as common mallow to English-speaking Europeans,it acquired the common names of cheeses, high mallow and tall mallow (mauve des bois by the French)as it migrated from its native home in Western Europe, North Africa and Asia through the English-speaking world.

M. sylvestris is a vigorous plant with showy flowers of bright mauve-purple, with dark veins, standing 3–4 feet (0.91–1.22 m) high and growing freely in meadows, hedgerows and in fallow fields.

One of the major areas which Malva Sylvestris grow is north east and central of Iran . Also in North Africa, biennial in the Mediterranean and a perennial elsewhere.It can be straight or decumbent,branched, and covered with fine soft hairs or none at all, M. sylvestris is pleasing in appearance when it first starts to flower, but as the summer advances, “the leaves lose their deep green color and the stems assume a ragged appearance.