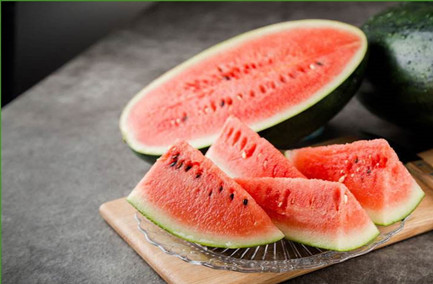 Watermelon is grown in favorable climates from tropical to temperate regions worldwide for its large edible fruit, which is a berry with a hard rind and no internal divisions, and is botanically called a pepo. The sweet, juicy flesh is usually deep red to pink, with many black seeds, although seedless varieties exist. The fruit can be eaten raw or pickled, and the rind is edible after cooking. It may also be consumed as a juice or as an ingredient in mixed beverages.

Kordofan melons from Sudan are the closest relatives and may be progenitors of modern, cultivated watermelons.[2] Wild watermelon seeds were found in Uan Muhuggiag, a prehistoric site in Libya that dates to approximately 3500 BC.[3] Watermelons were domesticated in Egypt by 2000 BC, although they were not the sweet modern variety. Sweet dessert watermelons spread across the Mediterranean world during Roman times.[4]

Considerable breeding effort has developed disease-resistant varieties. Many cultivars are available that produce mature fruit within 100 days of planting. In 2017, China produced about two-thirds of the world total of watermelons.